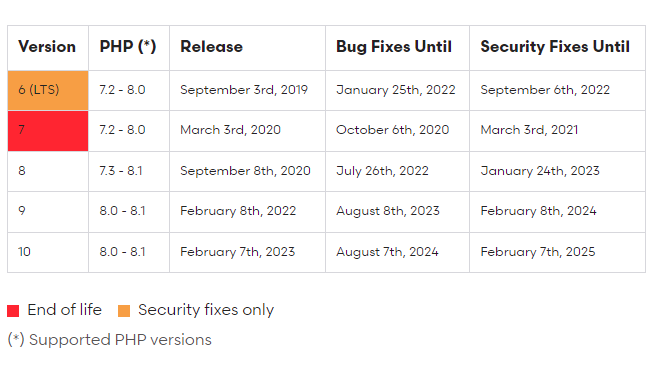 Before we jump into the new features, we’d like to point out that starting with Laravel 9, Laravel will release a new major version about every twelve months instead of the previous six-month schedule:

Laravel uses a variety of community-driven packages as well as nine Symfony components for a number of features within the framework. Symfony 6.0 is due for release in November. For that reason, we are choosing to delay the Laravel 9.0 release until 2022.

By delaying the release, we can upgrade our underlying Symfony components to Symfony 6.0 without being forced to wait until September 2022 to perform this upgrade. In addition, this better positions us for future releases as our yearly releases will always take place two months after Symfony’s releases.

From the releases support policy documentation, here’s what you can expect going forward with tentative dates of upcoming releases:

The Laravel website got a fresh new design for the launch of Laravel 9. It was designed by @martinrariga, with Torchlight syntax highlighting that we also use here on this site.

Find out more about Laravel 9.x

These are just a few of the new features in Laravel 9 and to see a complete list check out the Laravel 9 release notes as well as the upgrade guide. Also, don’t forget about Laravel Shift if you want an easy way of updating.

If you prefer video format, check out Laracasts: What’s New in Laravel 9 also has free videos about this release.

Finally, we’d like to thank everyone who contributes, submits PR’s, shares ideas, and uses the framework. Laravel is genuinely a global team effort.